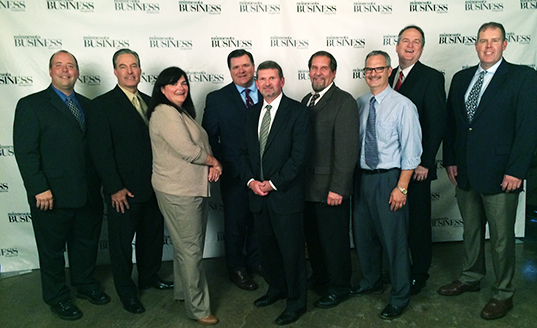 ST. PAUL (September, 2014)  – Minnesota Business magazine has named Skyline Exhibits the Gold winner for the Minnesota Manufacturer of the Year, Best in Class: Large Company. The award recognizes overall excellence in the manufacturing industry in Minnesota. Skyline, based in Eagan, was also a top three finalist in 2013.

Nominated companies were judged on significant achievements over the past few years, in new products or services, competitive improvements and successes.

New products and services include the launch of several new exhibit systems including Envoy®, which has become Skyline’s most popular system, and the revolutionary WindScape®, the world’s first air powered exhibit system – and Skyline’s fastest-growing system. Both received industry awards for product design. Skyline also launched its new Creative Services Group (CSG), which offers creative content services like 3D animations, videos and promotions to its clients through a worldwide Dealer network.

"We are deeply honored to receive this award. To have won this award in Minnesota, the land of Fortune 500 companies, makes it all the more impressive," said Bill Dierberger, President, Skyline Exhibits. "I am so happy for our people, especially Tim Brengman, our Vice President of Operations. His leadership in this endeavor has been evident. The secret to our success is really no secret at all; it’s our people. Skyline’s worldwide employees and dedicated dealer network collaborate every day to create award-winning exhibits through designing with our proprietary and innovative products. The best evidence of this is the fact that 30% of our sales today come from products that were invented within the last 5 years. When you have earned in excess of 100 patents during 34 years and continue to ship exhibits at an on-time rate of 99.8%, it’s no wonder we are excited about our future.”