Be Ready When the Trade Show Opens: 6 Pitfalls To Avoid

Ever have the trade show open before you were ready for it?  ”Just give me one more hour!” you begged the Trade Show Gods, as the first tantalizing rush of attendees swept past your unprepared booth.  It makes me break out in a cold sweat just thinking about it.

No one should have to endure that, especially if it can be prevented.  Here are the 6 perennial speedbumps I’ve seen over the years, and what is the best way to overcome these obstacles and be ready at the opening bell.

1.  You get pulled in multiple directions

You cannot simultaneously set up the lead machines, unwrap the giveaways, check in the booth staffers, put staples in the staplers, get the computers hooked up, and make sure the booth is set up and clean.  So don’t even try.  Delegate.  Ask the staffers who arrived before the show to unwrap the giveaway pens for you.  When a small crisis comes up before the show, you don’t have to rush off to solve it.  You can call upon your booth staff teammates to fix a minor problem, so that you can still be there to orchestrate the rest of the preparations.  Designate a lieutenant to be responsible for the minor stuff (staples, etc.) – let them delegate the menial tasks – freeing you up to handle larger crisises.

This is the biggie.  Without your trade show exhibit finished, it’s like you’ve shown up at a party with no clothes on.   Often the cause of not having your booth set up is that something was missing or broken, or else you misjudged the time it would take to complete.  The best way to avoid this is to have your booth installation started on the first day of set-up, so if there are issues that arise, you have time to solve them.

And to have a better chance of getting your exhibit crates or cases delivered to your booth on the first day of set up, ship them to the show’s advance warehouse.  If you’re bringing a portable trade show display that you’re setting up yourself, be sure to practice before the show.  And just in case, have a list of emergency contacts for when things do go missing or get broken – know who to call and when.

Most trade shows are held in cities with alluring distractions to pull in more attendees.  Unfortunately those distractions can also work on your booth staff, keeping them out until late at night, or even early in the morning (that never EVER happens at a show…well…except the shows in Las Vegas, maybe…).

How do you keep them focused on the job at hand?   Give them an earlier deadline to show up than the opening of the show.  Tell them you need them there an hour before the show opens for a pre-show meeting — and on the first day, better make it two hours before the show.  Then, really have that meeting to go over objectives, promotions, lead machines, lead slot locations, and more.  You can even have a breakfast meeting before the pre-show meeting.   Then you can call the no-shows on their cell phone two or three hours before it’s critical.  Even better is to ensure their boss is also on the booth staffing team, so they feel more responsible for getting there on time.

4.  Booth staffers not yet trained

What if your staffers arrive on time, but don’t know what to do?  You can spend the next hour trying to coach them, but then another one arrives and you have to start over again.  This is a time to rely on your veteran booth staffers who can step in and coach for you, covering booth staffing basics, as well as what is specific to that show.  You can also minimize that disruption by doing a teleconference or webinar with all staffers a week before the show.  That way you have many trained before the crucial hour before the show, and you also have more people ready to train their buddies who arrive later.

If you’ve got multiple computers being used around your exhibit, you have exponentially more chances that all will not be ready by show opening.  Minimize your risk by testing all computers in their at-show set up (wireless mouse and keyboards?  Longer cables between computers and monitors?) before you leave home (unless you are renting from the show).  Have any presentations pre-loaded onto the computers, and bring (or have someone else bring – in case your bag gets lost) presentations on a thumb drive as backup.  Also, if you are depending on 4 laptops from booth staffers (see point #3), ask 5 or 6 people to bring theirs.

For day two and three at the show when staffers may show up even later, be sure to have their computer login and password so you can get things going without them (if you locked their computers in the booth).  And if you can’t bring an excellent booth staffer who also is an IT whiz (thank you, Barb!), then get trained by your I.S. department on how to connect computers to the internet, and what Control Key/Function 8 does.

If using wireless internet, get your access codes from show management early on day one, and make sure that whoever is responsible for those codes a) gets there early enough every day to get the wireless up and running, and b) doesn’t leave the show a day early – with the codes in their pocket!

6.  Something is broken or missing

It could be that you don’t have staples or waters for the booth staff, or light bulbs or pens or clipboards or whatever.  When that last frantic hour is ticking away, these things can happen.  There are two ways to overcome this final obstacle.  The first is to have a well-stocked plastic tub shipped to the show that has all the things you need, and to restock it back at your office before it ships.

The second is to know the lay of the land before your crisis hits.  Find out where the closest Home Depot, BestBuy and Walmart/Target stores are the day before the show starts, and have a rental car at your disposal to get you or someone else there in a hurry if needed.   There may also be a store in or very near the convention center that specializes in all this kind of stuff — even Velcro!

Trade shows are complex.  Even with great planning there’s no way to avoid all the potential problems that can come up.  Hopefully you’re now better prepared for these 6 potential pitfalls, and will start your future shows ready to greet the opening-bell throng.  When you do run into problems, most of all keep calm and stay flexible. 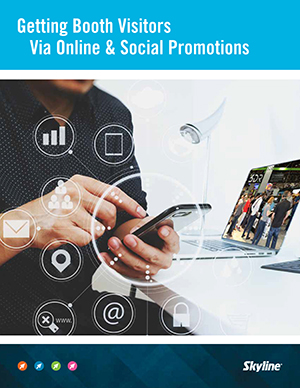