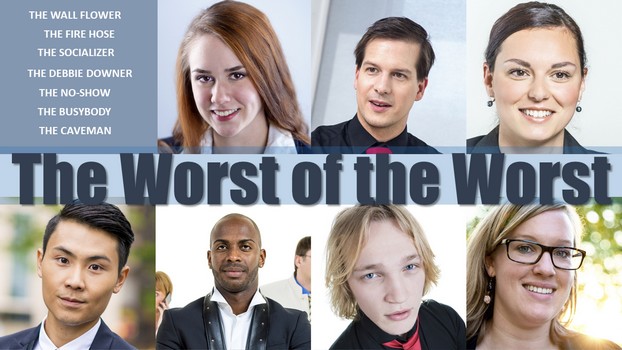 The Worst of the Worst...How Your Company Can Avoid Them!

You know them. You’ve met them. Maybe you’ve even BEEN them. Bad Booth Staffers. As long as there have been trade shows, there have been booth staffers behaving badly and ruining the company rep. See how many of these you recognize:

This one needs little explanation. We’ve all met the guy who chats up everyone who enters the booth, but instead of having quick, meaningful conversations with prospects, he gabs away the expensive show time conversing with other sales people and management. And when he does engage in a discussion with a potential, he settles for small talk instead of taking a lead.

The Fire Hose spews the never ending flood of corporate talk, drowning prospects with unnecessary, unwanted information. Because they are too busy yakking, they never ask attendees about their needs or goals or wants, thus turning off visitors and washing away your ROI.

The Wall Flower lacks the motivation and bravery to approach passing customers and initiate conversations. And while it doesn’t take an extrovert to make a great booth worker, booth staffers who wait to be approached or, worse, avoid interaction altogether will not garner near the leads of those working the aisles.

Ah, the Eeyores of the any event, Debbie Downer is the proverbial dripping faucet of negativity. She has a knack for finding something wrong with everything, for complaining without end, for criticizing even the best of people and circumstances. While constructive criticism is essential for growth, Debbie Downers don’t bother being constructive. They just want to complain. Not only is she not a joy to be around in or out of the booth, she potentially dangerous to your company’s brand, as she spews her negativity onto everyone who walks by.

Unlike the other bad booth staffers, the No Show doesn’t actively harm your brand with his poor performance. He just doesn’t show up for his shift, leaving everyone else to do the heavy lifting and fill in the gaps. This not only lowers your lead count potential, but if your No Show has an essential job or unique expertise, his absence could be devastating.

This is one of those types that are deceptive at first – they SEEM like they’re busy. They are on the phone or on the computer or straightening up the booth or taking care of some other business. What they are NOT doing is actually staffing the booth and collecting leads.

Beware The Collector! The Collector just wants to scan badges and pile up leads. He’s not interested in getting qualified leads or in engaging the attendees beyond their badges. His motto is “NEXT!”

The Hijacker is everyone’s least favorite bad guy. Not only does he swoop in on conversations where the potential is already primed  in order to take leads, he actually steals leads, pocketing them without reporting them. This completely undermines the company’s efforts to track qualified leads in order to measure their trade show ROI. Even worse, The Hijacker has been known to steal leads from outside their sales territory.

Me sit. Me no talk. Me just grunt. The Caveman is the booth staffer who sits and does nothing, doesn’t engage with customers, doesn’t make eye contact, and barely utters a word to attendees.

Hey! Hi! How Are you?! Whatcha Doin?! They Don’t Take No For An Answer! They Are Scary And Intense And Annoying! They Have One Level And That Level Is TEN! They Will Cause Your Potentials To Avoid Your Booth!!

The Exaggerator is probably a well-meaning booth staffer because they are actually trying to get all the leads they can, but their method is exaggeration and stretching the truth in order to woo clients. He might misrepresent your product or your company’s capabilities. He might exaggerate what your competitors’ weaknesses are.

While The Overseer is actually on the roster as booth staff, in reality he thinks booth staffing is beneath him, so he takes on a supervisory role. He stands along the sides and tells people what to do and how to do it, never bothering to roll up his own sleeves and get to work. What he doesn’t realize is that successful exhibiting companies employ ALL of their manpower to work the booth, from the CEO down. This boosts company morale, drives more sales, and improves the company image.

We’ve all met The Swan. She sails in late in the mornings and ducks out early in the evening. She’s constantly flitting in and out of the booth to run a quick errand or grab a coffee or “take care of” something. She’s somehow always around and never around. Either way, she’s of little value to a booth whose primary need for staff is to be “present.”

Maybe this list made you laugh (most likely because you know many of the people above); maybe it made you cringe. We’ve all witnessed these characters in action. And sure, no one is perfect, and every business has people who have quirks and flaws. But there’s just something worse about these Bad Booth Staffers being the face of the company in a high-pressure, high-value trade show environment.   Choose wisely and you will have an abundance of leads available to you.